Written About the Israeli Entrepreneurship for Kids Program for Schools


Last year, the Israel21C online magazine published an article about the EFK program. Following this article, people from different countries around the world showed interest in the program and three companies from India, Vietnam, and Botswana acquired a license to distribute the program in schools in their country.

Galit Zamler told the Israel21C's reporter about it and thanked her for that, and the reporter decided to write a follow-up article under the title Our story leads to deals in India, Vietnam, Botswana 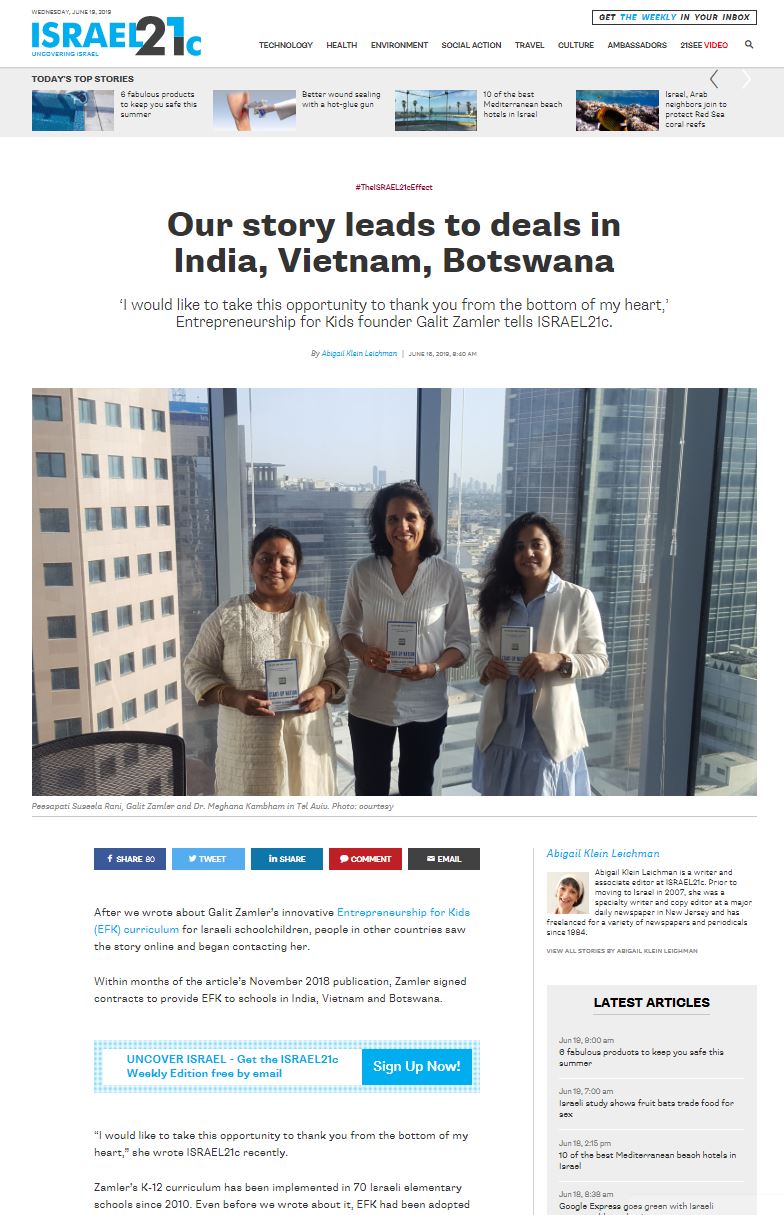 This article also became popular over the internet and got many shares.

Not just the governments, but #Indian and #Israeli companies also love to partner with each other to create better future. #Israel's @galitzamler and her K-12 curriculum is creating winning formula for kids in #India through @carengrowind https://t.co/PJjXXMFudj pic.twitter.com/LEfSsGGyrw 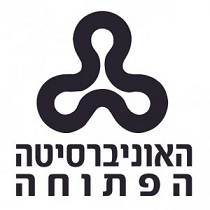 Galit Zamler was invited by the Open University's Entrepreneurship Club to share her story as an entrepreneur.

The name of the lecture: "From a Social Initiative in One Class to an International Business Venture."

The attendees were impressed and got inspired by Galit's story. 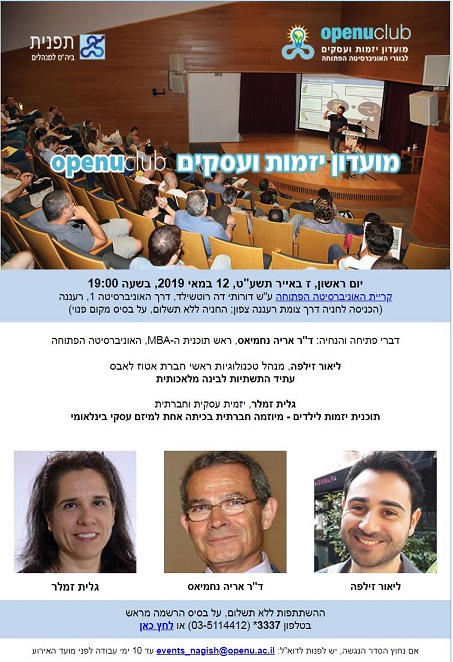 Watch the lecture (in Hebrew)


The online Jewish Magazine in Canada Jewish Independent wrote how the EFK program began as a volunteer project and how it has evolved and spread to many Israeli schools and abroad. 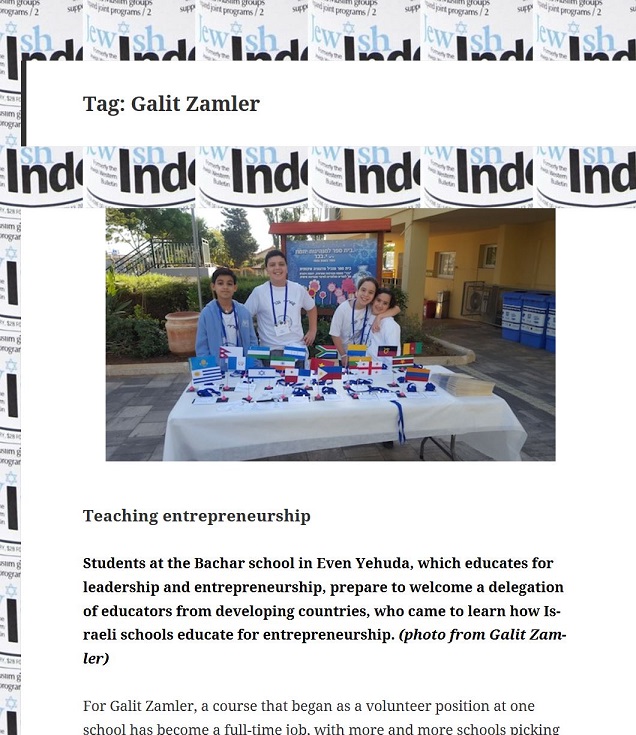 
At the beginning of January 2019, the EFK program was launched in India by Carengrow company led by Dr. Meghana. The program launch wad part of an innovative and entrepreneurial event in cooperation with Mr. Winny Patro from the Ministry of Education in Andhra Pradesh.

Internet magazine Viral Mom interviewed Galit Zamler as an entrepreneur and asked her to give one tip, which in her opinion is the most important to success.


Abigail Klein Leichman, a writer and associate editor at the ISRAEL21c magazine, wrote about Galit Zamler and her entrepreneurial program.


Entrepreneurship for Kids Program was launched for the first time outside of Israel at the Hebrew Academy school, Miami Beach, Florida, USA, headed by Rabbi Avi Bossewitch, Dean of Academics and Innovation.


The Sun Sentinel magazine interviewed Galit Zamler and Rabbi Avi Bossewitch on the occasion of the launch. To read the full interview, click on the link.


The Jeducation World magazine also published an article on the implementation of the Entrepreneurship for Kids Program for the first time in the USA. Click the link for the full article. 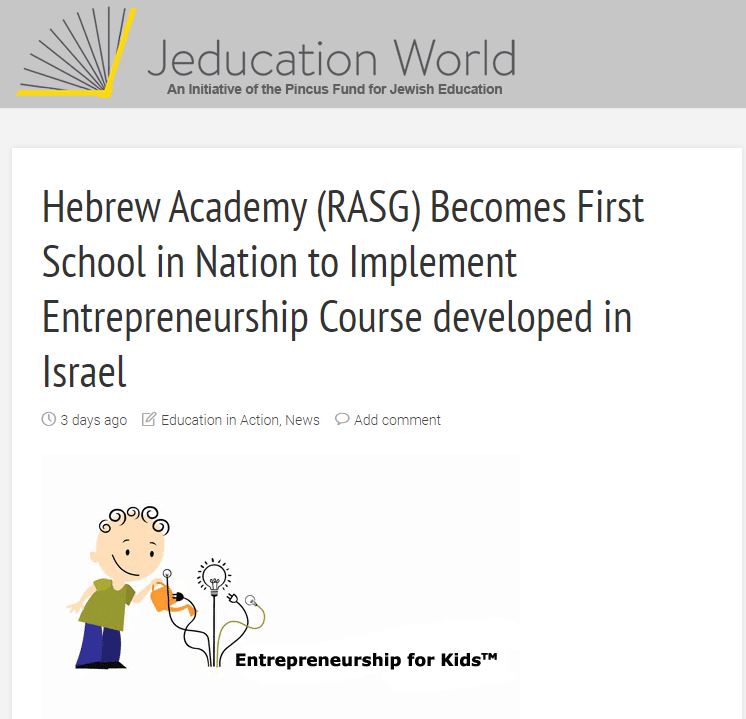 
The Telecom News Magazine also wrote about launching the Entrepreneurship for Kids Program in the USA.


Kav LaHinuch Magazine wrote in the section "Good to Know", dated April 27, 2017, about the Entrepreneurship for Kids Program 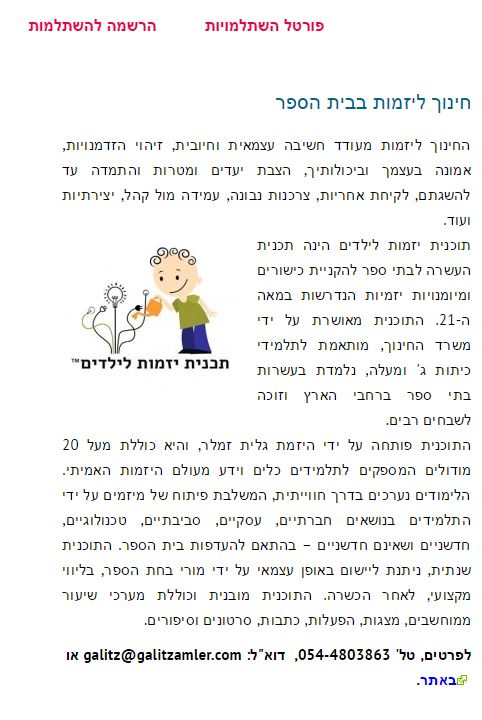 The students thought about ideas for projects and prepared models, which they presented on a summit day to Galit Zamler, the developer of the Entrepreneurship for Kids Program.

The newspaper of the Southern Sharon Regional Council wrote about this: 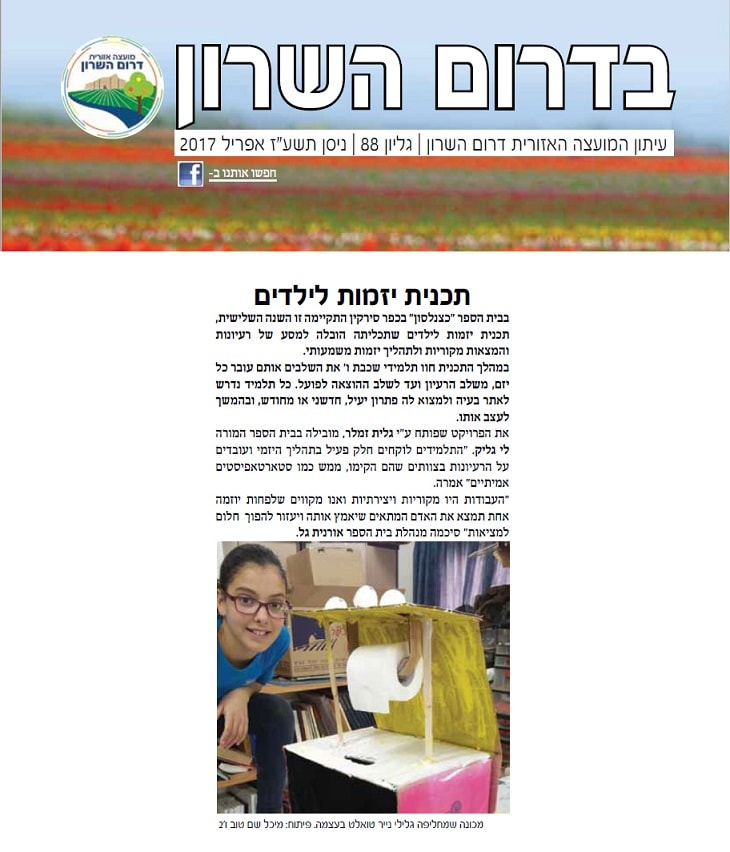 
Gil Shurka, a columnist for The Marker, wrote about the entrepreneurial program for children in schools. 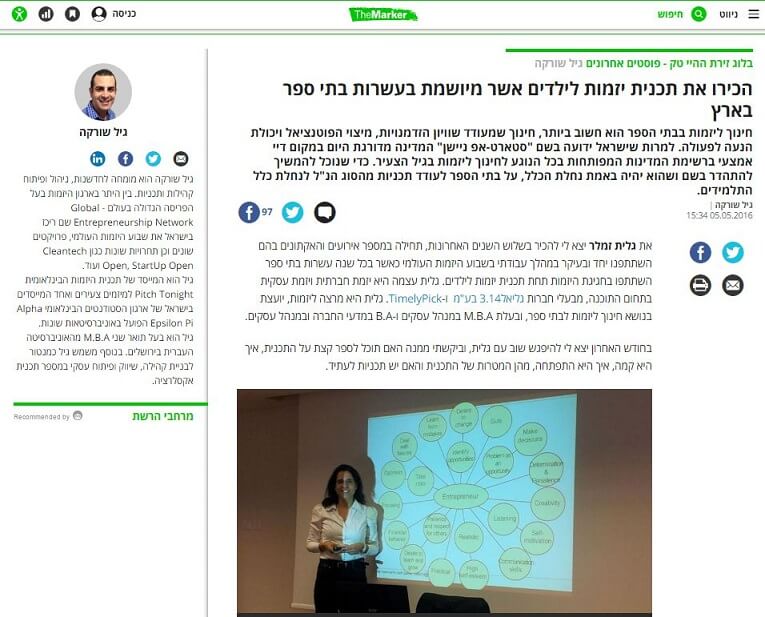 
Avi Weiss, the Editor-in-Chief of the Telecom News website, attended a lecture by Galit Zamler as part of the Open University Entrepreneurship Club. 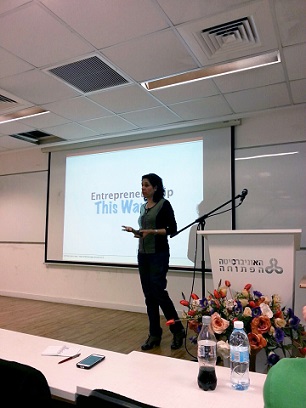 In his article "our oil wells are the minds of the entrepreneurs. Therefore, starting an entrepreneurship in elementary school", summed up the main content of the lecture. 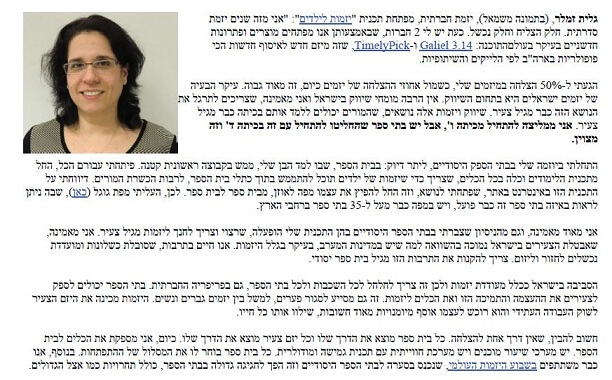 
I am 10 website helps students to learn and practice the material that is taught in schools for free by using videos on various learning topics, and so with the kind assistance of volunteers.

The site found it appropriate to mention our entrepreneurial program for children as such that helps to build a better and more equal company. And for that, the we would like to thank those behind the website "I am 10." 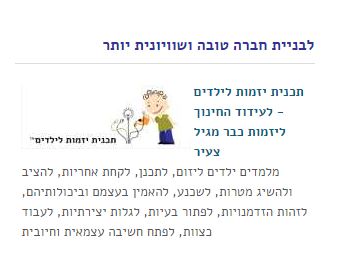 
Tamira Galili, a magazine reporter for "Free Llesso," visited the HaShalom school in Mevasseret Zion, which has implemented the enrichment program for the second year, guided by Sigal Bar, the Vice Principal.

After the visit, she published this article "Learning to make dreams come true." 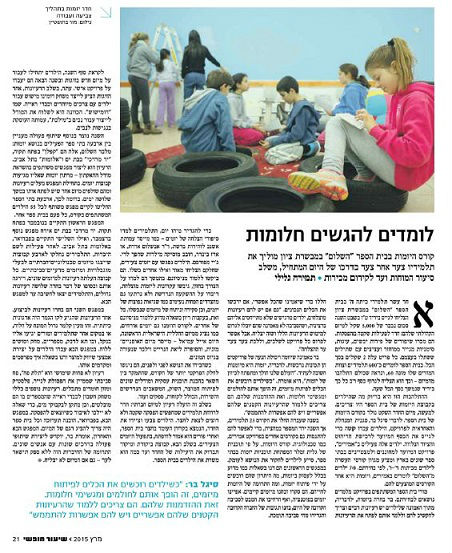 This is part of the article:

They reviewed and examined existing projects. They defined potential entrepreneurs' characteristics, and expanded their perspective to the entrepreneur's immediate surroundings. They also examined feedbacks of the closest people and defined what is a supportive environment."

They wanted to learn from their experience. Later they learned about the importance of defining a vision, they formulated the principles of successful entrepreneurship, and discussed the needed resources. The young students were not deterred from the less pleasant aspects like common mistakes of entrepreneurs, as well as review and analysis of failed ventures.

All this followed the discussion of why you should learn from the experience of others. Guest entrepreneurs were also invited to the course."

Read the full article - by clicking on the link (in Hebrew).


In honor of 2014 GEW, a number of entrepreneurs were asked to write about their work.

Galit Zamler responded to the call, and the column she wrote appeared in an article published in the global news under the title "GEW in Israel: entrepreneurs for the sake of encouraging the periphery."

The subject of the column: "Israeli Students Mark the Global Entrepreneurship Week, by Galit Zamler." 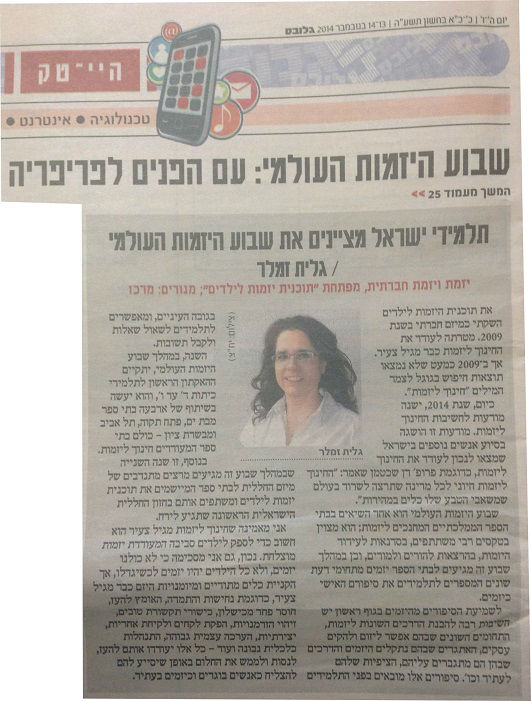 
The Great People Everywhere organization was established in order to contribute and strengthen Israeli society, by providing recognition, appreciation and exposure to people who have decided to change their reality by contributing to the community and the environment.

The organization strives to promote the values of social justice and help to others that are reflected in daily "little" deeds and influential acts alike.

The organization believes that the mediadoes not provide a sufficient platform for social actions, and therefore Great People Everywhere sought to allow exposure to the public.

The organization works to expose and cherish the good people behind the deeds. This way they believe awareness will increase and motivate the public to help others.

Ladies and gentlemen! We are proud to present to you the latest righteous person of the month of May: Galit Zamler. Galit was chosen as the great person of the week.

Galit has been leading the successful Entrepreneurship for Kids Program for several years. Recently, the Israeli foreign ministry hosted a delegation of leading educators from developing countries, to learn from us how Israel encourages entrepreneurship education from an early age. Galit does not manage the association and was not paid for her fantastic work, and many schools are now implementing her program.

Galit, we have considerable respect for your contribution to the community and your efforts to promote young people in the world, and in Israel in particular. Congratulations! Give her encouragement for her wonderful work and enter the page to give her a Like and recognize and appreciate more lovely people like her!


In the Amirim school in Binyamina, a group of grades 4-6 studied the entrepreneurial program under the supervision of Hila Attias Almagor. The local newspaper "Vine" wrote about the course. 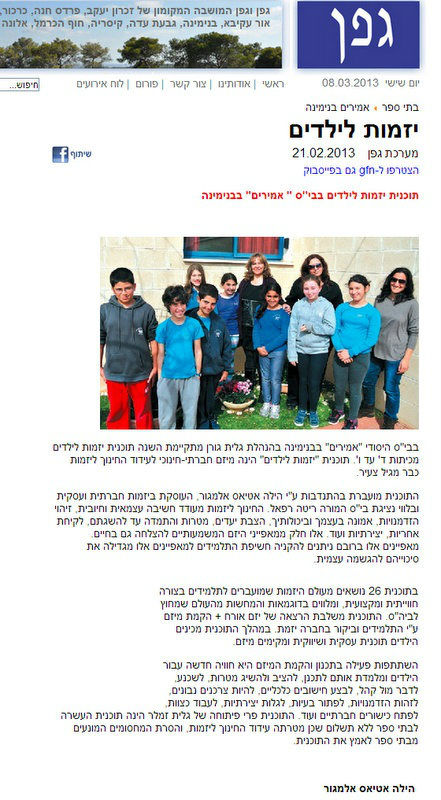 
Magazine "ead of Education facing educators in Israel, wrote about the subject of entrepreneurship in education and covered the activities of the children's entrepreneurial program. 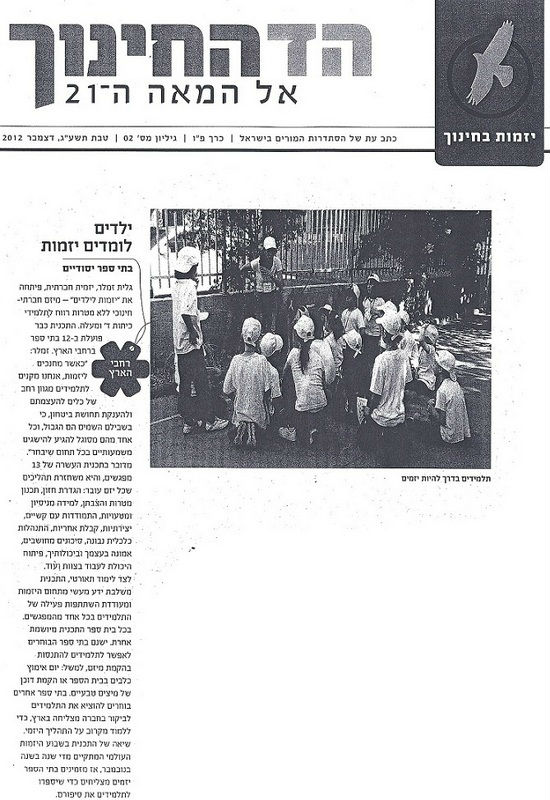 The Child That Was Exposed to the Entrepreneurial Arena


Li Keren, a nine-year-old girl, disengaged from the television for 100 days, during which she discovered the entrepreneurial activity. 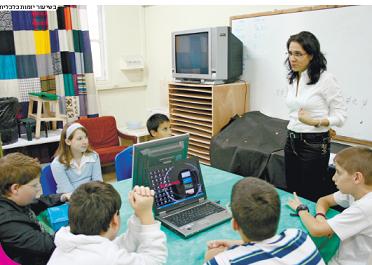 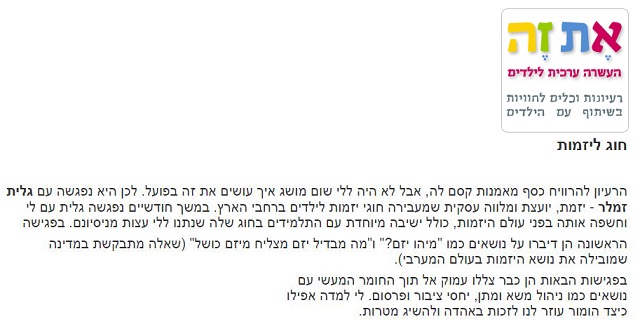 
Towards the 2010 GEW, Galit Zamler took part in a panel of entrepreneurs organized by the college of management. The financial Economist portal published an article "Entrepreneurship begins with children." 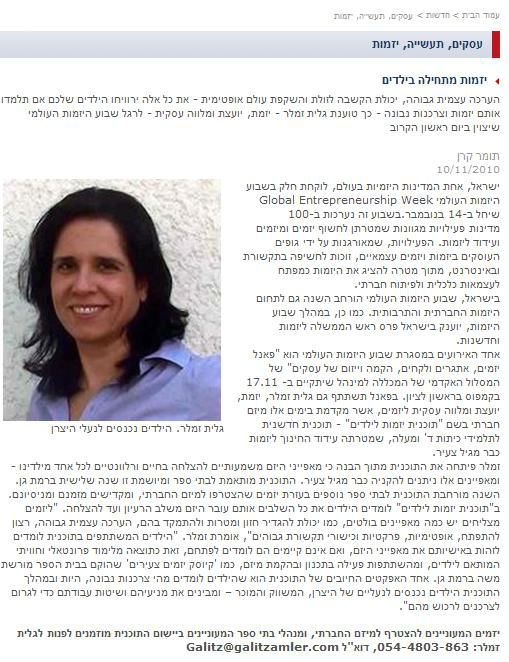 
As part of Global Entrepreneurship Week, Anat Lev Adler wrote in Yediot Aharonot about the program. 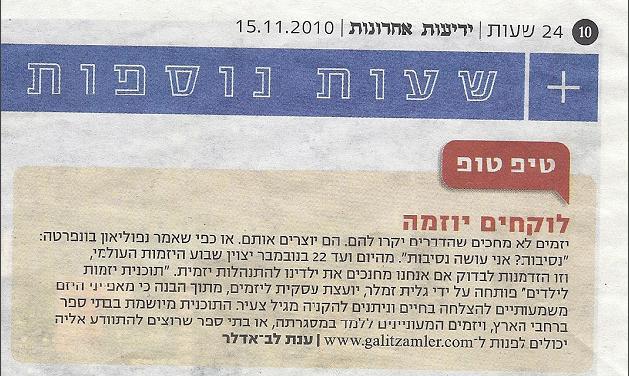 
Interview with Galit Zamler to the blog of Sagit Festman for the Saloona magazine on the subject "The entrepreneur is me". 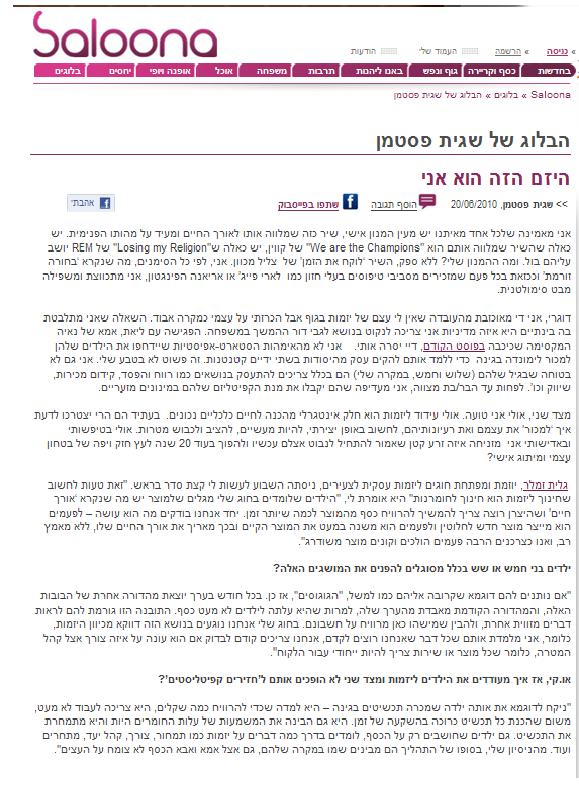 
The program was implemented successful for two consecutive years, in the religious Moreshet Moshe school in Ramat Gan.

The children, parents, teachers and principal loved the program. 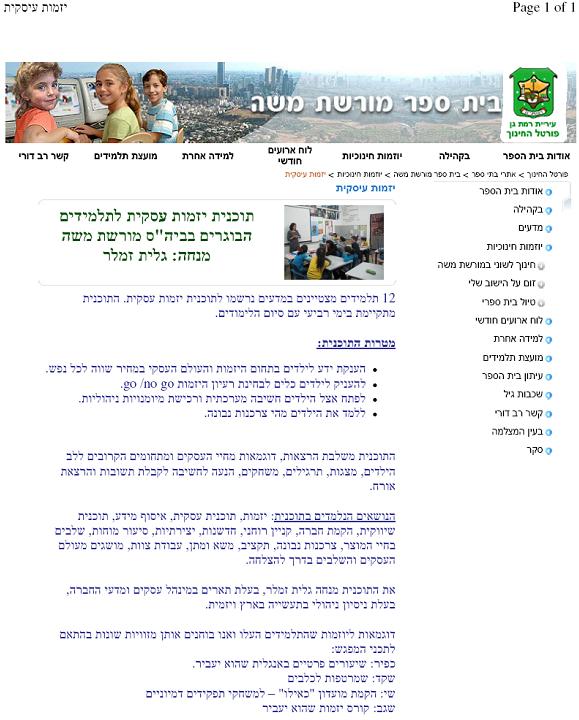 
The young entrepreneurs were recognized and their final project was published on the Ramat Gan municipality site. 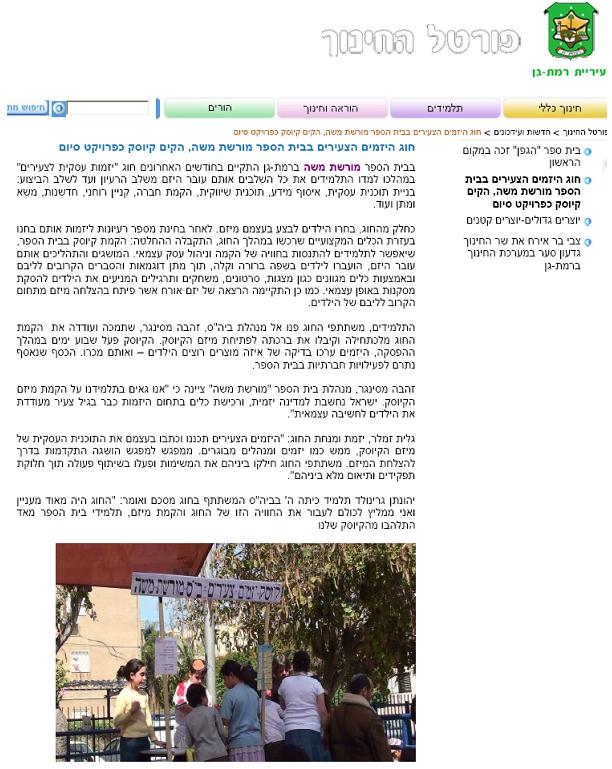