About Galit Zamler the Developer of Entrepreneurship for Kids™ Program 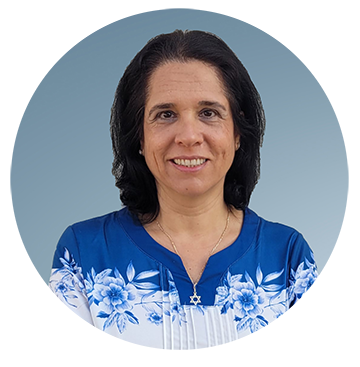 Galit Zamler is the creator and mastermind behind the Israeli Entrepreneurship for Kids (EFK) Program.

How did the idea of Entrepreneurship for Kids™ Program come about?

The idea of developing an entrepreneurship curriculum for students at school stemmed from the identification of the need to teach children entrepreneurial skills. Such skills will help them succeed in life in a dynamic world, in which we have to reinvent ourselves.

The Entrepreneurship for Kids Program curates years of knowledge and experience in management and entrepreneurship that has been adapted for children in second grades and up.

At first, Galit taught the program at her son's elementary school. It was a big success, and other school heard about it. Galit was invited to teach the students at that school entrepreneurial studies, and again, the program was declared to be particularly successful. (Read the reviews)

At that point, Galit decided that the program was a definite benefit to students. It was so effective that she rewrote the program in such a way that teachers can take the lesson plans and implement the entrepreneurship lessons by themselves.

The program combines content and concepts from the entrepreneurship and business field, visualization, and experiential aids such as examples, presentations, videos, activities, games, articles, stories, humor, and more. All of these elements of the program inspire students.

The program has been taught in Israel and abroad since 2009. Over the years, more and more schools have come to understand the importance of acquiring entrepreneurial skills and implemented the program.

Galit always makes sure that the content of the curriculum is relevant and actual so that students and the teachers find entrepreneurship studies exciting and fun to learn.

Watch a video in which Galit Zamler briefly talked about the story of the program to nurture student entrepreneurs:

How do you know that Entrepreneurship for Kids Program is a success?

"The numbers, the comments, the interest, and the demand, prove again and again that the EFK program is a successful project.

I started my occupation in education in entrepreneurship in 2009 in one school (Moreshet Moshe in Ramat Gan). Since then, dozens of schools have joined in teaching the program every year. In light of the expansion of the program, I understand that it succeeds."

What comments did you get from the principals and the teachers?

"I'll give a few examples that are just the tip of the iceberg:

Year after year, teachers and principals teach this program and tell me that their students anticipate and wait for the entrepreneurship lessons. That makes me realize I've touched the students' hearts, sparked their interest in entrepreneurship, and helped them express themselves adequately.

One teacher (Chani Richmond) taught the entrepreneurship program in a private school in the United States. She wrote to me that she misses teaching it and that she herself has learned a lot from it. That saying makes me realize that the program empowers the teachers too.

Furthermore, teachers who attended an institutional training I led on entrepreneurship education within the school (A.D Gordon, Ramot Weizmann, and Yitzhak Navon schools) wrote feedbacks greeting the significant contribution the course has on personal development and to their ability to teach students life skills. Through such feedbacks, I learn how much the program provides teachers with knowledge and training relevant to our advanced world and helps them teach and learn together with students."

What comments have you received from the students?

"One of the inquiries I've received was from a student (Itay Shteinberg) who participated in the EFK course when he was a fifth-grader. After eight years, he contacted me to tell me about an idea for a project and asked for my opinion. After so long, that kind of inquiry proves that the entrepreneurship studies were so meaningful to him.

Another inquiry was from a student (Yair Weizenhoiz) who took part in entrepreneurship lessons when he was a third-grader. He turned to me four years later and told me that he plans to present the project he developed while taking part in the entrepreneurship program back then, in front of his classmates at the time (7th grade). Yair asked me to watch him talking about his venture. This is an enormous satisfaction, and again- the understanding that the entrepreneurship studies have a high impact on children.

Another occasion was when a teacher (Lee Glick) felt that she's not progressing with the program modules because students were often having heated discussions about program topics. These discussions made me understand that the program excites the students. It encourages their involvement, which is more important than moving on with the study materials, especially when those same students asked the teacher the following year to continue teaching entrepreneurship."

Is the program a success abroad too?

"The Hebrew Academy, a private school in the US, which gives its students advanced tools and programs, taught my entrepreneurship program. The school staff professed that it was an eye-opening program. They asked me to continue teaching the program a year later. This kind of occasion definitely testifies that the program brings something different, innovative, and essential.

Besides, companies from Hong Kong, India, Vietnam, and Papua New Guinea have acquired licenses to distribute the program in their country. So this is definitely a feeling of satisfaction that the program became an international success.

Furthermore, I teach students from China an online yearly entrepreneurship course. There's a demand for this program, and it implies success."

What are the students' parents saying about the program?

"Sometimes parents come to me during final events at the end of the year in which their children present their projects they've been working on during the year. They often tell me that what the students learned, they themselves learned in a bachelor's degree. From that, I understand that the value the students receive during the entrepreneurship studies is high, and that the parents understand that.

There are schools that the students present the projects they have been working on all year. Usually, during such events, their parents tell me how much their kids have learned from the program. I know from them that the values and skills that the students are learning are valuable and needed.

Some parents wrote me letters about how much their children have earned from the entrepreneurship studies. Those are letters that are always fun to get."

When did you realize that the program is marketing itself?

"Every year, I encourage the schools to mark the Global Entrepreneurship Week, and each year more and more schools are doing so. Even schools that are not part of the entrepreneurship program are informing me about it.

When a teacher (Michal Maman) taught entrepreneurial lessons in one school, then moved to another school, and asked to introduce the program there. From this, I realize that the program is marketing itself.

When people from all over the world visit the program website and then show interest in implementing it in their country, it shows that the program is innovative on an international level.

Additionally, when schools that already teach entrepreneurship and execute many projects turn to me because they are interested in the program's process and depth, I know the program has a real added value. This value stems from the fact that I am an experienced entrepreneur who knows the world of entrepreneurship closely."

What are the comments that moved you the most until now?

"I'm always getting excited when I receive emails from people from all around the world, parents, teachers, principals, businessmen, and others, who encourage me for this project that's called Entrepreneurship for Kids Program and tell me that I'm inspiring.

A mother whose son participated in the course when he was in the sixth-grade contacted me eight years later. She asked if her daughter, who is in the seventh-grade, could join the entrepreneurship course. Her application made me understood that the program left a mark not only on the child but also on his family.

Teachers say students who participate in entrepreneurship classes are not eager to go to recess. The students prefer staying in class to ask questions and share their project ideas. It proves that entrepreneurship and the different aspects of it fascinate them.

It moved me that India's government representative came to Israel to meet with me and explained that they want to learn entrepreneurship education from Israel and that he is interested in implementing the EFK program in Indian schools. It is both a feeling of satisfaction and a sense of pride in the country.

When a wealthy private school in Israel (King Solomon) that can allow itself to purchase every program it wants chose to teach the program, and its school staff showed admiration from it, that made me realize that the program stands in the highest standards possible

It always excites me when teachers tell me that parents called them to find out 'what classes do their children study?'. They did so because the children came home and said that they enjoyed the entrepreneurship classes.

I feel satisfaction when the lesson is over, the students feel that it's ending too fast, and they're not rushing out for the break. On the contrary - they're staying to ask questions and explain their ideas for projects. That's how they're proving that the entrepreneurship subject, on its various aspects, interests them."

Galit Zamler in a lecture to the delegation of educators from developing countries on behalf of the Ministry of Foreign Affairs. 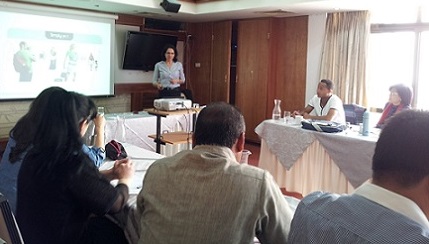 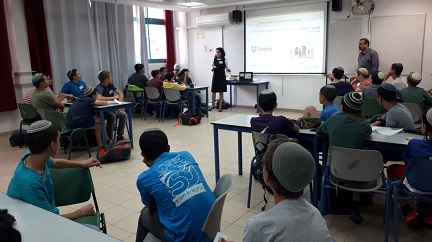 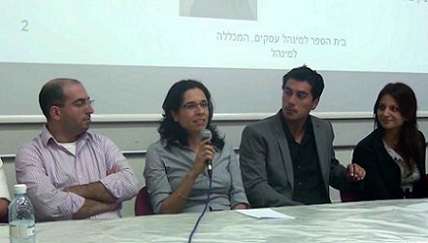 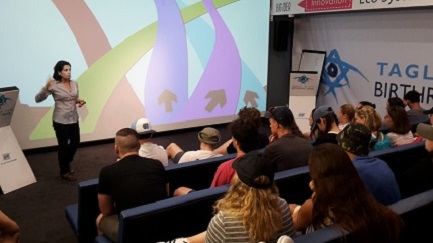 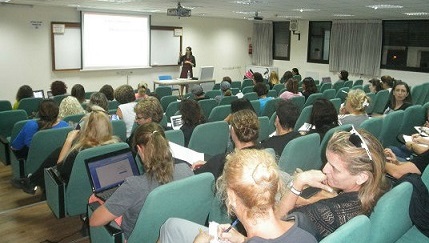 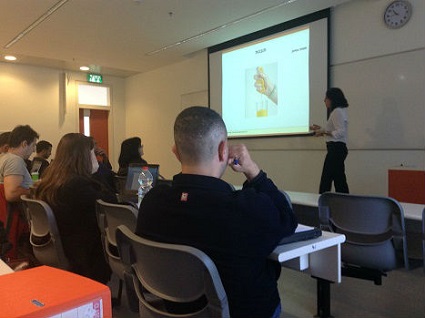 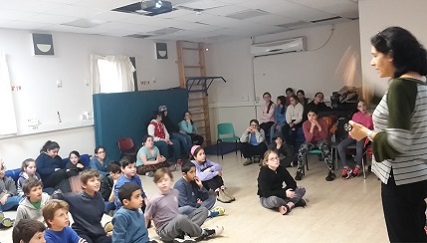 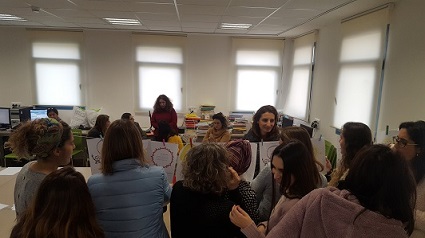