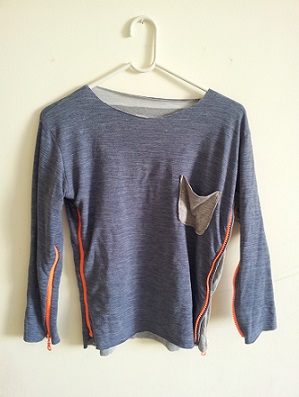 Yair, a third-grade student had an idea of a T-shirt for any size. Yair prepared a preliminary sketch and formed a team. They met with a clothes designer, sewed a shirt, and conducted a survey among the students and teachers. The survey proved that the T-shirt has great potential for success.

As part of the Young Entrepreneur Leadership program at Mordei HaGetaot school in Ramat-Gan, students in grades 3rd-5th participated in entrepreneurship lessons, based on the Entrepreneurship for Kids Program.

Students brought up initiative ideas, and some of those ideas were executed.

One student, Yair, came up with the idea of a "T-Shirt for Any Size."

The origin of the idea was the sci-fi movie Back to the Future in which the hero pushed a button, enabling him to enlarge or shrink the size of his clothing.

Yair thought it was a good idea to sew such a T-shirt because it would save parents money when buying clothes for kids. As a child grows in size, his/her shirt will grow as well.

Yair presented his idea to the entrepreneur leaders' class, and his classmates asked him questions so that they could understand his concept clearly. 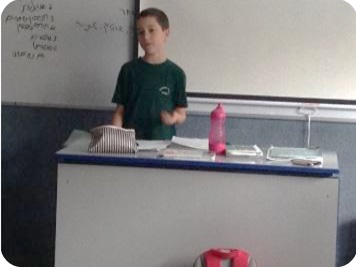 Below are the questions that were asked:

Yair did his best to answer all of the questions. 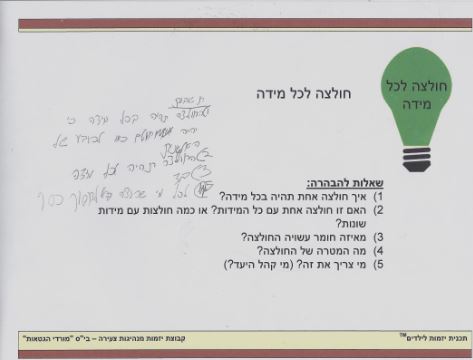 In doing so, he sketched an outline of the shirt as he saw it in his mind: 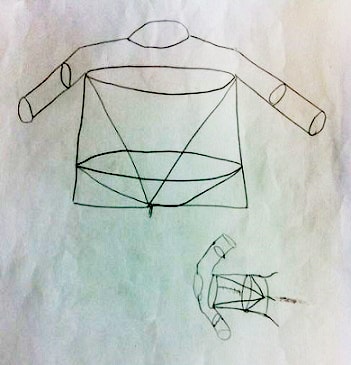 To move forward in developing the initiative, we talked to Rotem Eyal, an Israeli designer, and owner of "Boo Designer Clothing," and scheduled a visit to her shop. We wanted Yair to present his idea to Rotem and to hear her professional opinion.

We knew Rotem from Global Entrepreneur Week. She was invited as a guest entrepreneur to the Mordei HaGetaot school and shared with students her experience as a fashion entrepreneur.

We took a minibus to the shop on Shenkin Street in Tel-Aviv. 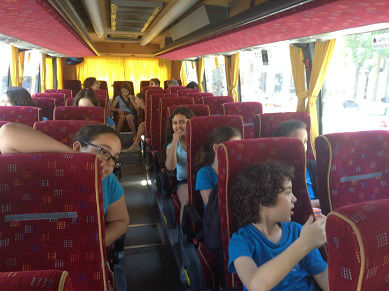 We met Rotem, and she told us how she built her business. In the beginning, Rotem sold only fashion accessories. 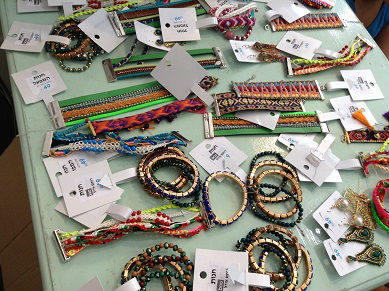 After a year, Rotem realized that for the business to work, she should also add clothes with a personal design. She studied fashion curriculum for three years to accomplish that goal. While she was studying, she opened a shop of clothing in her design, that their uniqueness is comfort for working women.

Rotem explained the process of sewing clothes: Draw a model on a page, preparing the model according to the correct proportions of the body, and then get the fabric cut. The students saw a template for sewing pants. 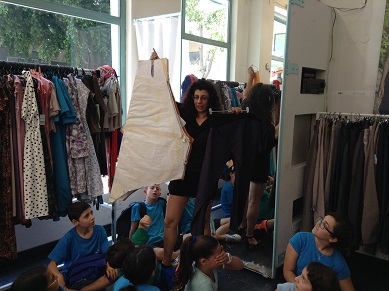 The students also felt with their hands the different kinds of fabrics: Elastic, cloth, lattice. 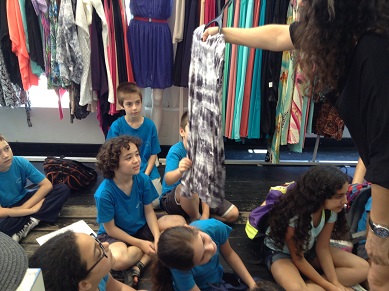 Yair presented the "T-Shirt for Any Size" initiative to Rotem and his peers. 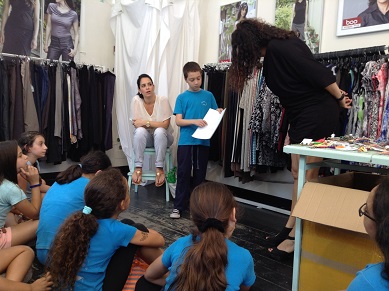 Rotem said that the idea was nice, interesting, and absolutely doable. She advised Yair to check if there is a need for such a product. According to her, in the clothing, the fashion issue has a high impact.

In response, the students asked: "How do you know whether the clothes you design will be sold or not?"

The Rotem's answer was that it is due to a combination of experience, intuition, and orientation that help her know with that.

The kids thanked Rotem for hosting them, and for the counseling. Then they went out to wait for the minibus to take them back to school.

While waiting for the minibus to come, Orit Barashi, Geffen's mom and owner of the Beresheet Bridal Studio, explained to the students the difference between a casual clothing boutique and a bridal dress boutique. 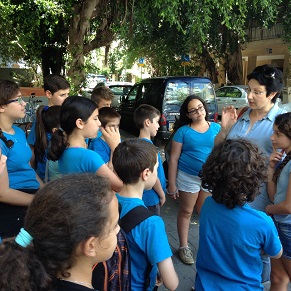 At that point, Geffen and Shani joined Yair's venture, and they formed a team. Together they developed a shirt for all sizes.

They met with Orit Barashi at her studio in Ramat-Gan after she agreed to help design and sew the shirt. Together the young entrepreneurs worked on the design, chose the type of fabric, and determined how one can shrink or enlarge the sizes of the shirt.

After the young entrepreneurs met with Orit several times, a shirt for all sizes was designed and sewn. It was a shirt that can be enlarged or shrunk by four sizes.

You can change the size of the shirt with hidden snap buttons along the sleeves and down the side of the shirt. Those hidden buttons can shrink or enlarge the shirt by two sizes.

Besides, you can shrink or enlarge the shirt by two additional sizes by using a colorful and stylish zipper, running along the sleeves and down the side of the shirt.

Yair, Geffen, and Shani decided to call it HEN for the following reasons:

- HEN is the Hebrew word for beauty.

- HEN is a unisex name, and the shirt is also unisex.

To market the shirt, the young entrepreneurs defined the benefits of the shirt:

- It saves money to parents because the shirt grows with the child.

- It saves room in the closet because people who wear it can buy fewer shirts.

- It can be worn loose or tight.

The entrepreneurs had to check whether there was a need in the market for their product. For that purpose, the young entrepreneurs presented the shirt to school teachers and asked them survey questions. Every teacher, without exception, loved the idea. Some even offered to help fit and market the shirt for pregnant women whose body changes during pregnancy.

The entrepreneurial students conduct a survey among the teachers: 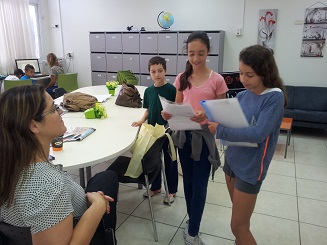 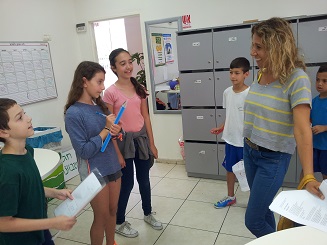 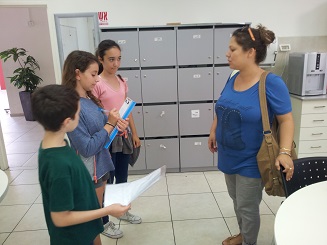 The students also presented the idea to the school principal, Ronni Shasha. Ronni loved the idea very much and suggested to turn the product into a business venture with the help of parents. Ronni also advised the students to offer the product to clothing stores, that could help market their shirt. The young entrepreneurs were thrilled about the support they received from the director. 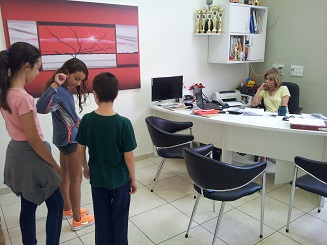 The teachers represented the parents, who were in charge of the actual payment and purchase, but the young entrepreneurs realized that the real target audience was the students, who were supposed to wear the shirt. This is why they presented their idea to a representative group of their classmates and asked them whether they would buy the T-shirt or not.

As you can see in the picture, almost all students voted FOR the initiative, meaning they were interested in buying the shirt. 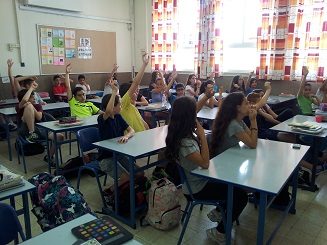 At the same time as developing this venture, a television program called The Initiative was aired, seeking young entrepreneurs. Given that, Yair, Geffen, and Shani made their way to the production offices and presented their initiative. They were invited to show up to the set, but because of a scheduling conflict, they were forced to give up the opportunity.

We should mention that the entrepreneurs of the Storage Table initiative were also invited to the production office to present their idea. Two schools that conduct the Entrepreneurship for Kids Program, one of which is the Yad-Mordechai school in Bat-Yam, won first place for developing silicone can tops. The second initiative of the Kaplan school in Petah-Tikva, where the students planned to establish a playground for people with disabilities, was supported on the air from the Petah-Tikva mayor. The mayor expressed his willingness to integrate the student's initiative into a designated parking lot, benefiting disabled kids.

Photos from the audition: 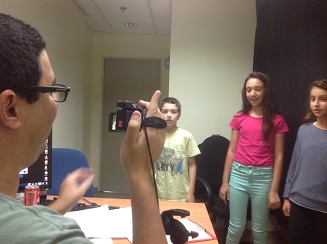 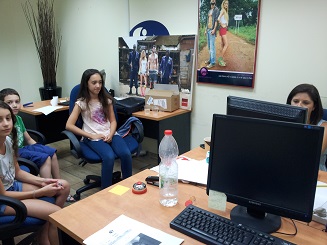 At the production offices: 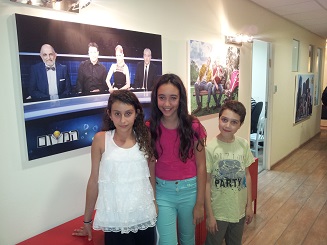 Young entrepreneur student's parents summed up the process their kids had gone through:

"The kids went through a great process and result.
We hope for new and exciting projects next year."

"The kids all gained an interesting, challenging, and very developing experience. Thank you for the support and encouragement you gave the kids throughout the process."

Here is a summary presentation of the T-Shirt for Any Size initiative:

When you talk about meaningful learning, entrepreneurship education is definitely the answer. Today we got further proof of that:

Four years after participating in the entrepreneurship curriculum for kids, Yair, who graduated seventh grade, presented the T-shirt for Any Size initiative to his classmates and told them all about the entrepreneurial process.

Good luck to Yair in the future. Thanks for letting Galit Zamler come to see you presenting the project HEN - "T-Shirt for Any Size".

Yair, as a seventh-grader, is presenting the project: 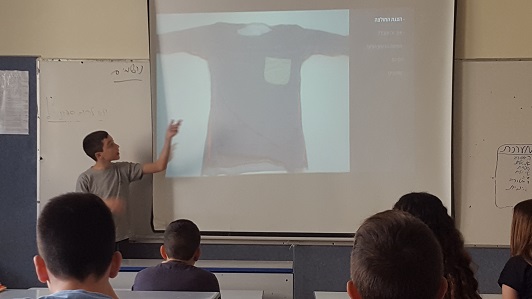 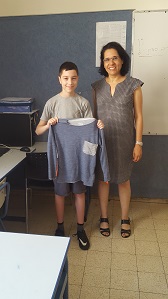